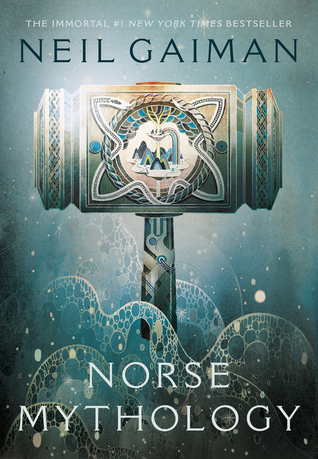 Norse Mythology
Author: Neil Gaiman
Rating: 5/5
When I began reading this book I felt somewhat discouraged. The introduction gave me the impression that I was ready to wade through hours and hours of a scholarly account of the poetic edda. I sat on my bed priming myself to endure another dry translation of archaic myths riddled with footnotes and fragmentary accounts. I was happily surprised to find that no such torture would be in store for me.
Quite unlike many other authors and translators of ancient myths, Gaiman is able to make use of a compelling and simple writing style of breath new life into the Norse myths. I began reading the book in the dim light produced by the clouded sun that shone through my window. By the time I was finished I was far from that place, gripped with terror and amazement, as the book rendered up before me images of the world serpent in battle with Thor, and armies of the undead clashing in the winter of Ragnarok. Gaiman transported me to a land of ice and cold where Loki plots and plans, giants inhabit fortresses, and the god’s display great power and cruelty, often for perverse ends.
In his retelling of Norse myths, Gaiman is able to transform the gods from one dimensional caricatures of themselves into dynamic characters with anthropomorphic motives and emotions. It is perhaps this as well as the dramatic plot and vivid retelling that makes Gaiman's book so outstanding. My only critique of this book is its brevity as by the time I was done reading I found myself hoping to lay my hands on more of the Norse mythological tales. Hopefully you will feel the same way.

Popular posts from this blog

October 17, 2019
Amid the chaos of the Syrian Civil War a chaotic changing of the guard between NATO powers has occurred, with American forces organising a hasty retreat and Turkish forces fighting their way into Northern Syria simultaneously. This Turkish invasion has been greeted with the same tired and inept response from American politicians we have come to expect when an anthropomorphic humanitarian disaster occurs and there is no money or strategic gain to be made in its rectification. First came the storm of tweets and prayers from politicians the world over ready to express in 30 seconds or less their great sympathy for the soon to die innocents of Kurdistan. Once this great sympathy has been sufficiently displayed the serious work government begins in apportioning the blame.  The assignment of culpability in the Syrian civil war requires a certain measure of nuance. Certainly the most guilty of causing of the catastrophe in Northern Syria was the Turkish government which invaded, but such
Read more

Victims of Our Fear

June 05, 2017
Terrorism in the 21st century, has become a powerful word. We all have an image of terrorism, as an act with the intention to kill people or otherwise cause damage in a violent manner for a given ideology. We are more than cognizant of the effects of this violence on people. There is constant coverage of terrorist actions and it has become, since the bombing of the twin towers in 2001, an obsession of the media to fawn over every detail of terrorist attacks. The number of casualties, the motivation of attackers, the dramatic manhunt, the personalities of the attackers and the victims. Following an attack these details are quickly enough revealed. This constant bombardment of information and of even the tiniest details relating to an attack has come to be expected in daily media coverage. Soon after the initial drama has ended, often before the bodies are even cold, there are a horde of experts, pundits and politicians who arrive on screens around the world to speak in panicked tones
Read more

Shah of Shahs Ryszard Kapuściński 5/5 stars “Everything that makes up the visible outward part of revolution vanishes quickly. A person, an individual being has a thousand ways of conveying his feelings and thoughts. A crowd on the other hand reduces the individuality of the person, limits him to a few forms of behavior. The forms through which a crowd can express it’s yearnings are extraordinarily meager and often repeat themselves, the demonstrations, the rally the barricades. This is why you can write a novel about a man but a crowd - never” Kapuscinski One of the things that Kapuscinski brings to the table which I more often than not find lacking in the modern worlds cold and analytical journalism is a certain element of empathy. The ability to enter a situation , that to us makes little sense and place oneself in the position of both the victims and the perpetrators. To do this selectively is easy, it allows poor journalists to craft one sided narrative of good
Read more

Popular posts from this blog